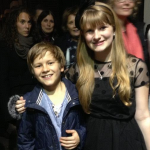 -not on purpose :P) I'm from Long Island, New York, and have seen 6 Broadway shows. My top 3 are Matilda, Phantom, and Wicked (in that order). I'm 5' tall and 14 so just miss the broadway cut off to be one of Matilda's friends. I do not go to an acting school, but my mum is trying to get me into one. Matilda had brought me closer with my only 2 two friends in my schools and has also introduced me to many nice people in the cast as well as 2 really nice people from Singapore. :) Read below for more in depth info on me ya stalkers!!

My sister's website: http://jessicadonnellan.4ormat.com/home (yes the picture on the homepage is of me)

Retrieved from "https://matildathemusical.fandom.com/wiki/User:TheatreNerd5?oldid=4475"
Community content is available under CC-BY-SA unless otherwise noted.