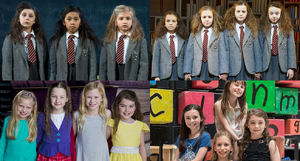 "Sometimes you have to be a little bit naughty"

Matilda Wormwood is the title character in Matilda the Musical.

Matilda is extraordinarily intelligent for her age, harboring a strong love for books, much unlike her dim-witted parents. She eventually develops a close bond with her teacher, Miss Honey, the first adult to recognize her abilities. She is also the first person to stand up to her fearsome headmistress, Miss Trunchbull.

Unlike the film, the musical adaptation emphasizes her imagination and ability to tell stories, rather than her telekenesis. She frequently visits Mrs. Phelps at the library to tell her the story of an incredible Acrobat and Escape Artist (originally Escapologist). Throughout the story, she discusses their new feat: "The Burning Woman Hurling Through the Air With Dynamite in Her Hair Over Sharks and Spikey Objects Caught By the Man Locked in the Cage."

NOTE: Kerry Ingram was the only Matilda to transfer onto the West End cast; Adrianna and Josie were unfortunately unable to transfer due to their height.

NOTE: Hannah, Jenna and Jaime continued to play Matilda on the US Acrobat Tour after their Toronto runs.

NOTE: Ingrid, Alannah, Dusty, and Tiana all had their debuts in Sydney.

NOTE: The Korean production will be the first production of Matilda the Musical to be performed in a language other from English.

Matilda performs in the following songs (Italicized text denotes songs in which she has a solo part, old songs indicate that it is Matilda's solo song)-

Community content is available under CC-BY-SA unless otherwise noted.